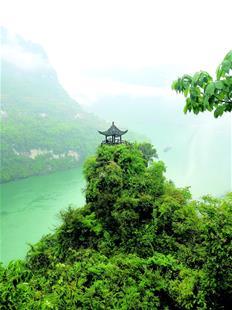 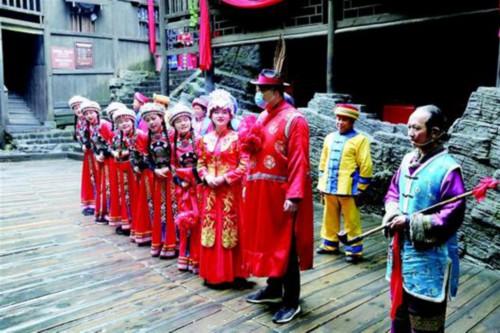 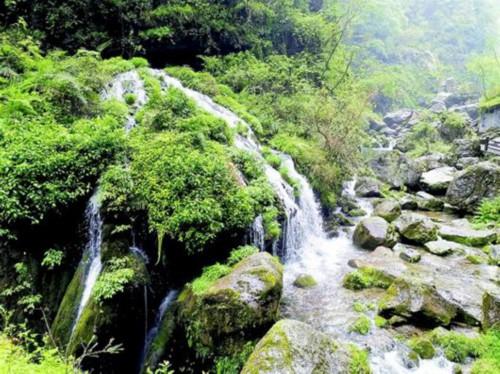 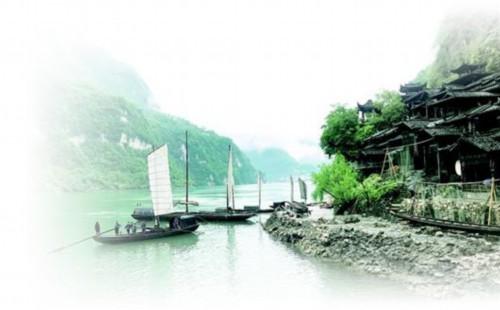 The pavilion is named after Li Bai's poem: "Raise a glass to the moon, three people in the shadow". Standing on the pavilion and looking around, the white clouds are rushing endlessly, the green hills are soaring, the dragons and snakes are dancing. The beautiful picture of the mountains and rivers, the long waves, the lights and the moon, and the boats returning to the people.

The Ba Wangzhai, divided into the East Gate, the Middle Gate and the West Gate, is a themed park that showcases the history and culture of Cuba and the wisdom of the people. The huge buildings are scattered throughout the park, integrating architecture, ancient military, rituals, dances, handicrafts and other aspects of Cuba's history.

Stone tablet in the minds of the local people is regarded as a holy object, is a blessing for good luck, the incense all year round. According to the "East Lake County" contained: the south of the Yangtze River there are huge boulders across 60 or 70 feet, such as cards raft, so the name of the stone token, stone sign that is the name of the place. Cards 32 meters high, 12 meters wide at the top, 13 meters wide at the bottom, about 4 meters thick, weighing more than 4300 tons, the majestic and spectacular from a distance. Magnificent.

2000 years ago, the Ba tribe flourished in the Three Gorges area, relying on salt spring resources, tea, mountain goods and other foreign trade and prosperity. The ancient salt route, once the economic lifeline of the Ba people, winds its way through the lofty mountains and still survives today. The ancient road of tea and salt in Ba Wangzhai was reconstructed on the site, showing the wisdom of the ancient ancestors.

Longjin River is one of the most amorous scenic spots in the Three Gorges People's Scenic Area, where the high-pitched trumpeting of slender men, the intermittent pounding of women's clothes, the sound of bamboo flutes from the deep shade, bluestone, bridges, flowing water and people's homes are all heard.

The area around the Gorge is steep and steep, and most of the houses are built on the hillside, surrounded by bamboo groves and bananas in the front and back of the houses. The house is called "Hanging Leg House" because it is built with a wall so that it can be level with the main house. When the youngest sister of the Tujia gets married, she "cries to marry" here, reflecting the ancient and traditional marriage customs of the Tujia.

The source of the Yellow Dragon Waterfall comes from underground caves, for the Three Gorges rare waterfall community, the momentum, the four seasons long flow, the waterfall is fan-shaped. The dragon is a beautiful creature, and it is a dragon. There is a folklore about the "Nine Dragons Running to the River", in which the yellow dragon is playful and refuses to leave because of the beautiful scenery. It is named Huanglong Falls because it turns into a waterfall in the stream.

From May 5 to June 18, 1943, more than 150,000 Chinese troops, under the command of Chen Cheng, commander of the Sixth War Area, fought bravely against the Japanese attack, and after more than a month of fierce fighting, won the Shihpai defensive battle, forcing the Japanese to stop the deployment of the west along the Yangtze River to attack the capital of Chongqing, thus invading the southwest.

Find a haven on a "healing" island.

A giant cloud of cosmic gas will ignite the galaxy.

Buy dried beans, meet these three kinds of dried beans, the head do not go back straight away, the vendor: I do not eat myself!

Coppa Italia: Napoli draw Inter with 2:1 on aggregate to qualify for the final

In India, who is "leading the pace" against China?

What was the identity of the person accompanying Meng Wanzhou when he appeared in court? And what does that say about the problem?